HOPES AND REALITIES IN SEARCH OF COEXISTENCE

The visit of the Pope Francis to Egypt on the past April 28 and 29 (only 27 hours in total) brought a blast of fresh air and of hope to the difficult relations of the Islam and West. That today are tense in many places of the world: for the salafists jihadists attempts in Europe and the USA; for the civil wars between shiis and sunnis in Iraq and Syria, with the military participation of Russia and West; and for the declarations of intellectuals and politicians of one and another sign and the popular manifestations, as expression of the opinions and the mental collective conditions.

A special importance and transcendency for these relations had Francis‘ visit to the ulema Ahmed al-Tayeb, rector of the Cairota university of al-Azhar. That is the principal model and ideological source for the 1400 million sunnis Muslims of the world. His relations with the Holy See were of «sine die» break from first of 2011. When al-Azhar cut the relations with the Vatican, arguing the interference of this one in the internal matters of Egypt.

In this context of rivalries and lacks of understanding, which was coming out the religious area, to project and affect the large social space, the president Abdelfatah al-Sisi (marshall of the AA. FF. and former Defense Secretary of the president Mursi) had requested to the ideological Moslem university, the renovation of his speech, before the increasing use of the Islam to justify the salafist terrorism. Al-Sisi also asked to al-Azhar that the ulems and muftis were controlling more the religious Fridays sermons at the midday in the mosques.

In his trip, the Pope visited and consoled the scarcely 250 thousand Catholics of the country. And he met his friend, the patriarch Teodoro II, of the orthodox Copts, whose church adds up 9 million faithful, signing a document in which the validity of the baptism was recognized mutually. The Christians already were settled in Egypt several centuries before his armed religious conquest by the Arabs in the year 641. They are collectivly reliable, discreet, industrious and pacific citizens. And because of it the radical local fanatics attack them by many ways and «train» with them for his crimes and outrages against the society. 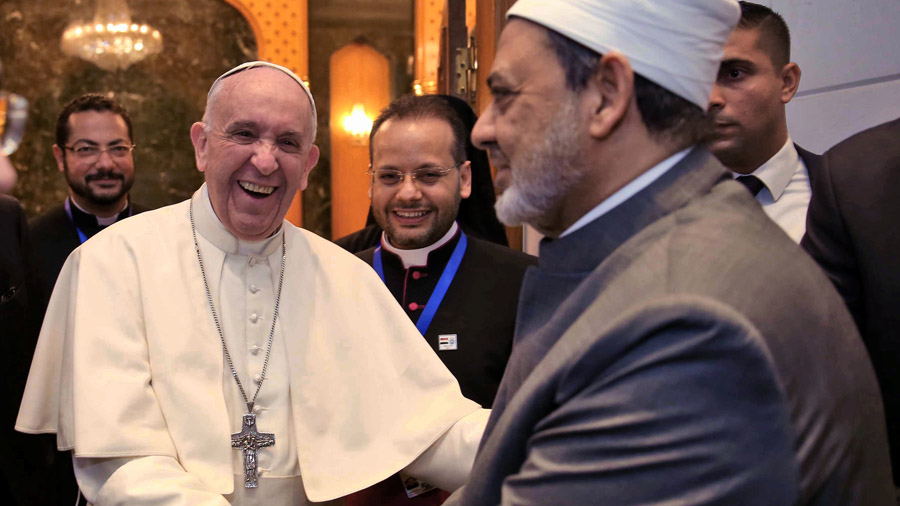 Nevertheless, the respected Moslem institution, by mouth of the assistant director of al-Azhar, Abbas Sluieman, closed these possibilities, even that of controlling and limiting the incendiary sermons, on the other hand, orthodox, of certain imans: «The Islam does not need self-criticism or update».

This means that all his revelation, is already transmitted in the Koran and the hadices or accepted sayings and facts (for his verified transmission) of Mohammed. And that they are already sufficiently studied and interpreted by the ulemas and muftis throughout the centuries. But this leaves the opened door to the radical salafist interpretation, so much to the violent or Qubism (that does not hold the power in any country), as to ideological and educational of the Saudi radical wahabism. That does not propagate with the armed revolution, which would inevitably overthrow a corrupt and full of privileges dynasty, but with part of the crude oil incomes, distributed to the related mosques all over the world. Radicals that it is not possible to directly condemn, in altars of the great freedom of interpretation and expression that accepts the Islam. That allows to condemn only the crimes and misbehaviors committed «as such» in his name by a small part of his faithful.

The important Words in the ecumenical Interview.

Al-Tayeb asked in general to the believers (all), «to walk together, liberating the image of both religions of false concepts and lacks of understanding». But this ecumenical message is not accepted by the majority of the clergymen (ulemas, muftíes and imans) of al-Azhar.

Ahmed al-Tayeb, for his part, indicated that «we should not ask for an explanation to the religion (his is the one that is indicated) of the crimes that commit a small group of his followers. The Islam is not a religion of terrorism, for much that a group of followers tries to manipulate the Khoranic texts and misinterpret them from the ignorance. Later, they spill blood and spread the destruction «. terrorism «. AL-AZHAR AND ITS MOSQUE.

Also the other two monotheistic religions received his part: «If we open the door for the accusations, as we do it against the Islam, no religion, civilization or history would turn out to be innocent of the charge of violence and terrorism”.

The Employ of the Violence by the Religions.

The Jews, in their stage of conquest and settlement in the land of Canaan, the Palestine, the Promised Land to Abraham and his descent, from before the Joseph’s and his family exile in Egypt, practised the hard violence of the Ancient Age. It was the only mean to defeat and expel the pagan and idolatrous peoples of these lands. That the Jews had to conquer and occupy. To be able to guard and transmit up to the fullness of the History, the beliefs, laws and procedure «agreeable to Yehova« for his faithful. And the depraved and idolatrous essence of those peoples was the moral justification of their conquest and separation of Canaan. 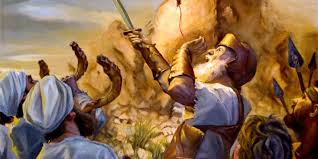 The conquest only was looking for the creation and establishment of a «living space» for the Jews, as nation. Without this living space, the Jewish nation would never exist. And the people will live very badly in hands of the dominators of the lands where it was settled. The experience of the Kurds, after the I World War and the disappearance and dismemberment of the Ottoman Empire, can offer a nearby and vivid example of the hardships that the peoples without State suffer still nowadays. And one of the organizational bases of the State is the national territory. That allow them to exercise and keep their rights and sovereignty as a constituted and stable nation.

This way, the Jews never tried to impose the Judaism on any submitted or expelled people. Since only they were holding the divine promises done to Abraham and confirmed to his son Isaac and to his grandson Jacob. They were the chosen people of Yehova.

The Christians took at the beginning of their times, initiated the Evangelization and with few small, weak and dispersed communities in the Roman Empire, the way of the peace, the preaching, the sobriety and the prudence. Inspired their conduct by the mercy, as love that is received, practised and spreads out. To separate of the rites and procedure of a strong, stable and bridled in norms State, made them stay, first, as «stranges». And then, with the increase and extension of the faithful, they were defined as enemies of Rome. Up to 10 great persecutions devastated the Church or faithful congregation, not the place, up to the 4th century. From Neron to Diocleciano, passing for emperors as «eminent» as Trajano and Marco Aurelio. The meekness, resistance and loyalty of the tortured Christians were well-known and admirable. For what Diocleciano sought to prolong and refine the tortures and not to create martyrs for the worship…

The Crusades were military and religious enterprises stimulated by the Church with exhortations, prayers and indulgences, and realized by volunteers of the whole Christianity. They were seeking to recover for Her the domain over the Holy Places of Jesus Christ in Palestine, from the hands of the expansive Islam. This occupied them in the year 635 and was putting successively obstacles to the individual and collective pilgrimage of the Christians. Between 1096 and 1270, eight Crusades were carried out. In 1291, was lost the principal strategic aim of the christian Europe from 200 years behind. ALI PASHA, ADMIRAL OF THE TURKISH FLEET IN LEPANTO.

Nevertheless, from the beginning of the military Yihad by the Arabs, in the 7th century, the Holy Original Places of the Islam in the peninsula of Arabia, always were in the political and religious hands of his faithful, well the Arabs or the Ottoman Turks.

The Church, as institution, used sporadically the violence during the modern and contemporary ages. In the inter-states conflicts arisen when she was holding and joining a political, mundane power, to his prerogatives and religious actions. This political power was concentrating and was born in the so called temporal states or pontifical lands. That, from a minimal surface of territory, the necessary to assure his functioning, independence and security, was growing and hypertrophying from the 4th century. After the Edict of Milan on the religious freedom in the Roman Empire, given in the year 311 by Constantin the Great. When the papacy managed to be an independent feudal lord or a sovereign in great part of Italy, up to its late reunification.

In 1870, after the Italian reunification and without the superfluous real estate and his problems and mundane burdens, the Church was abided to act and to live as the spiritual and governing organism that was. And here it might say that «the organ created the function«, upside-down of the known phrase of the Darwinian theory of the evolution.

From the middle of the 622 year, the Muslims employed methodically and systematicly the armed force, to fight the unfaithful peoples and, especially, to extend the lands of dar al-Islam. These are the lands where the Islam is the principal and dominant religion. And where are established and practise the Koran, the tradition of Mohammed or Sunna and the Sharia or direct application of them to the daily life of the believers and their norms.

No religion or, better, great religion, has followed and used the armed violence, in the same way and continuity that the Islam, for the imposition of their creeds and morals all over the world. And it is not that other religions have not used the violence in his defense or in the active pursuit of the unfaithful persons or «different» along his history. But this has never been as a part of his essence and nature, as “instrument of redemption» of the men, as another «pillar» of their basic duties. Confirmed this throughout the centuries, though intermittently, by the ulemas or ideologists, the muftis or jurists and the imans or conductors of the Salat or daily prayers and direct preachers of the people.