The last tens of meters up to reaching a determined enemy or gullible in his positions, form the fighting zone of the infantry. And she has yet major validity and importance in the actual wars. With the approximation to the combat from the brigade, the last global direct human possible vision of the units and resources, and the division, the western doctrines tend to be fixed in the dominant characteristics of the area and of his transitability or ground ongoing throughout the day and of the years seasons and according to the climate, to realize his plans.

But they neglect the use of the microarea at the levels of squads, teams, companions pairs and weapon servants. In the microarea, by means of the cover, the patience, the secrecy and the concealment, those «combats groups» might use against the enemy, his capacities of resistance (to the surprise), of mobility or concealed tactical «activity» (in the defense), of initiative and of freedom of action. Operating over him in minuscule «action interphases» (or microsectors). This is specially actual and necessary in the fight against regular and irregular «nobody» enemy, which lack the modern military technological advances and the economic resources to provide them. And that search for need and/or idiosyncrasy, to compensate his asymmetries with the domain of this infantry fight, seeking to see this way the white of the eyes of the enemy.

The military American Doctrine for the modern Wars.

The news that are received since years from the war operations zones in the countries in conflict, proceeding from the journalists inserted in the fighting forces, of the correspondents detached in the different populations of those (Kabul, Baghdad, Saigon, Hue) and those that the armies in presence issue, are revealing a series of characteristics that are common to the forces of the different western modern armies. They all are following the trend initiated by the Americans of having the enemy less nearby, more seen and observed and more beaten by the heavy air and artillery fire. It is not looked with this, in increasing effects order, to blind it, to disturb it, or to neutralize it, but to destroy it. That is the costliest and improbabliest of his effects and that demands an increased and deficient expense of the resources. And the worse thing is that does not always exist his direct connection with the offensive maneuvers of the ground forces. That often do not come to beating the broken enemy after the fires blows. The ground deployments are «secondary» and, therefore, also are his movements, dispersions and concentrations. The heavy fire has turned into a «economic and industrial» substitute (it changes military effort into dollars) of the maneuvers and the assaults of the ground forces. And the reason of all that is known by the poor and asymmetric enemies of West: the horror to the risk in combat and to assuming falls.

MONGOLS SOUGHT FOR THE ENEMY DISRUPTION, ATTACKING ITS VULNERABILITIES, PENETRATING ITS EMPTY REARWARDS, MOVING FASTER AND CREATING APPEARANCES FOR THE ENEMY.

The massive employment of the heavy fire is the principal «argument» of the Pentagon. His doctrine (Field Manual of the US Army 100-5, Operations) does not emphasize the initiative and rests in enemy reacts to the «real or potential action» from protected positions in the whole operations zone. The USA has created a ground forces with few capacity and skill in his small units for the combat in the infantry fighting zone, where more risk take the men. The trend of the doctrine looks for a formation (knowledge, education and command) and an intelligence (as elaborated, sufficient and constant information) excellent and abundant for the chiefs and officials. They are the managers of conceptualize the combat and the persons in charge of the fulfillment of the mission of his units and small units. It is supposed that the soldiers will do well and will work well, being able to use his sophisticated equipments and those of his companions of unit and fulfilling the orders of his subofficials and officials. These are supposed elaborated at the sufficient level, to give them perspective and cohesion with the intention of the high controls. 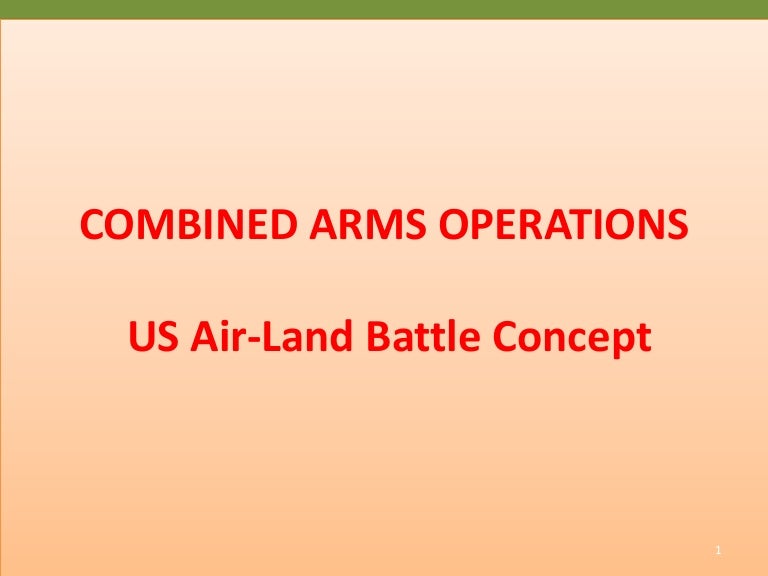 GOOD AGAINST A II GENERATION ARMY AND MORE CENTRALIZED THAT OURS: THAT OF SADAM HUSSEIN.

One of the operation principles that gathers strength in this renewed doctrine is that of the simultaneity. This establishes to beat at the same time, with heavy fire of artillery and aviation, the first and second enemy attack echelons and even his reserve, using against her the aviation and the tactical rocketry. The infantry and tanks forces are designed to attack or to counter-attack this now beaten enemy in all his depth and to assure the battle decision. Here does not exist the detection and the assault to the enemy weak points. Nor the «general saving» (an essential, universal and original principle of the war, according to Fuller) of means and of human lives. Nor the skilful, risky and fruitful maneuvers of functional and/or positional dislocation of the enemy. In opened area, the infantry cannot attack without indirect and/or direct heavy fire support and without concealment (night, fogs, smokes, draggings). But this complementary support has been hypertrophying, up to turning into a «weapon» for itself (as decades ago it was tried to do with the tanks) in the mix of the military resources and in one supposedly «maneuvers warfare». About which speak, but not well applied, the updates of the FM 100-5 from 1985. The such promising, already omnipresent and wished “not driven planes” of exploration and/or bombardment or «drones» are not more than the global projection in scope, safety of employment for the user and game of possibilities of the heavy fire, about which we speak. The marshall von Hindenburg designed the adage: «A battle without Schwerpunkt (the place where or the unit that applies our “principal effort”) is like a man without character». The North American army acts generally evoking a heavy, forceful mace, hammering and excessive. The Afrika Korps, by the contrary, reminded us an elegant, agile, unforseeable, (almost) sufficient and effective foil.

The Employment of a IIIrd Generation Army in the “military asymmetric” Enviroment.

The wars of fourth generation are the counterinsurgency wars or guerrilla wars or irregular wars or armed revolts or national liberation wars or organized banditry, which always have existed, coexisting with the conventional variants where only regular forces combat. They are those that the USA has lost or not won lately: Vietnam, The Lebanon (Marines’ peace disembarkation, then demolished in his barrack), Somalia (the uncontrollable and unforseeable wasp’s nest of «all against all» of the tribal masters of the war and the militias of the Islamic Courts, now of al-Shabab), Iraq and Afghanistan. They are very unequal wars against an enemy of lower technological military level man relative to the own regular forces, taken root almost always in the own or occupied civil population, militarily low intense and extensive or long in the space and the time. With awkward frequency, when the human (own or local agents) or technological Americans «sensors» detect some probable rebel activity of the yellow ones, muhaydins or hostile foreigners, they first devastate the building, the «block», the zone. What for them is really a surface target. And then they are going to wipe off and to do the corpses inventory, the «body count». Sometimes between the rubbles they can meet the corpses of a yellow, blackish or innocent and numerous Muslim family. It abuses of the attrition, when the enemy fuses with the civilians. It is careless the active, unexpected patrolling work, who needs proportionally less material and human means. But that bases In the military trade, the physical and moral courage, the freedom of action and the creativity in the low and intermediate commands and in the men.

The western soldiers have exchanged or forgotten the «principles» or rules of the good to do in the war, for the simultaneity and the depth of the distant fire, covering the whole enemy highly probable zone. With it there is neither means economy, nor principal effort, nor the necessary discrimination between soldiers and the potentially enemy civilians. The armies look eagerly for the safety and the confidence in his decisions and missions. Precisely when the environment in which they are and act in the last 5-years periods, the guerrilla or asymmetric wars, is variable, fleeting, without definite limits, confused and hard to grasp. The uncertainty, the chaos, the mistakes, the friction and the failures, the scanty means and the partially fulfilled plans, the weariness and the fear are the «omnipresent demons», that characterize and concern this neutral «magma» of the war. And it is neutral because it leaves being drive and guide largely by the human superior «plans and actions». That are stimulated by the «correct sense» of the commands, the determination, the will, the physical and moral courage, the motivations (ideological, religious, ethnic, social…), the suitable training, the sufficient equipment, the commitment with the tasks and missions and the respectable and respected commands.

George Bush’s strategic national doctrine established, but without being due explained, not tacitly accepted by both American parties, that the «asymmetrical wars» (irregular and with low level of military equipment) were supported and necessary, to remove of the American territories and those of his allies, the threats of the fundamentalist foreign terrorism of any origin, religion or ideology. It justified the ill-fated post war bad oriented occupations of Iraq and Afghanistan. But, with a fiscal and exterior deficits ran away and with a Democrat Administration, it is necessary for the USA to save in military resources. To dedicate them «to construct a nation here, at home», as defined Obama. This way, the USA lowered qualitatively the bar of the exterior terror, putting al-Qaeda as almost the only one violent not national enemy. This internationalist salafist terrorist «network», with delirious and impossible ideas, without own territory, with his operational chiefs known, fled and not wished as guests in a normal country, is a more attainable, adaptable and manageable aim for his forces and means of «rapid punctual incursions». This justifies the increase of the use of the drones, spy satellites, own or local agents in the hostile areas, operations of assaults by elite units and small expeditionary forces and of Marines amphibious assault. These transported by «ships of control and transport» of strategic projection with his naval escort. The deployments of tens of thousands of military men and his luggage and specific equipment for several years in an operations theatre, they are indefinitely rejected by the new «doctrine» of the «diminishing defense».