The radical fundamentalist Islamic insurgents or jihadistas devoted themselves between the 60s and 80s to attack those that they were qualifying as corrupt and false or socialist or westernized and liberal «Moslem governments». Their fortune was small for all their commited effort. On one hand, the retreat of the Soviets of Afghanistan. But, possessing the logistic western support and the indispensable military action of pashtuns groups and other Afghans etnias, commanded by the regional «lords of the war». That is to say, the out-standing and charismatic maliks of the clans and regional tribes. Between them the most famous was Ahmad Sah Masud, the Lion of the valley of the Panjshir. And, for other one, they got the capture of the power in Sudan, inspired by al-Turabi, a «spider captain», having managed to get strong in its Army. This is still the only case in the sunni world. The propaganda was not appearing between his priorities and the informative fingerprint that they left in the western world was wretched. Few found out that they existed and of those are more less who remember their wanderings of then. From the 90, the jihadist aim turns against the unfaithful West. Considering the Great Satan personified in the United States of North America and his democratic western coreligionists, as the first agitators and corrupters of the Islamic peoples.

The Jihad allowed the rapid spread of the Islam.

The Jihad, expressed in the precise concept that we all understand, is not gathered in the Koran. Nevertheless, though there appear in the Koran approximately 8 «pacifists» verses, exist near 100 aleyas or verses which encourages the Muslims to the defense of the community or Umma, to the fight against the unfaithful people and to the armed spread of the Islam. Established the main lines, rapidly the political chiefs of the Umma, including the Prophet, threw hand of the instrument that so clearly was offering them and that they needed in a “struggle of life or death”.

At the beginning of the Islam, when was reigning the “jahiliyya” (definition of the barbarism previous to it) in the Arabs, the Jihad was indispensable and inevitable for the defense of the new religion. That was arising in the middle of a “stormy sea” of pagan and idolatrous and more or less nomadic tribes and clans, which were populating Arabia. It had not even begun the first expansion of the Islam to the whole Arabic world, and the Muslims groups could be easily eliminated by their enemies. And any radical change, even only new, finds always an initial rejection. Which originates in the conservative «ideological and tradition inertia», which always exists in the society where it appears. 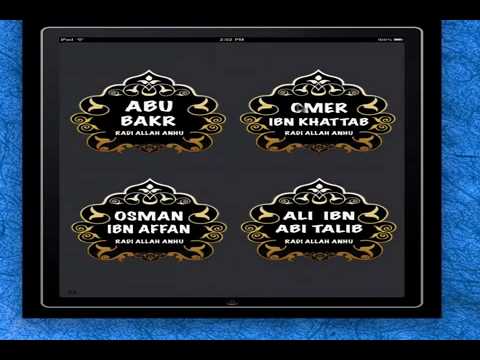 THE 4 RIGHTLY GUIDED (BY ALLAH) CALIPHS (THE RASHIDUN)…

Three were the reasons that stimulated the Arabic tribes to starting a way of conquest of the wide and distant peoples and lands, strangers to the Arabic Peninsula. The first one was the religious reason. As in any religious primitive community, the Umma was the center of the Allah’s mandates and benedictions. And so, being lived collectivly and keenly, the fulfillment of a monotheistic and simple doctrine. This religion was demanding, in addition, an active and coercive, constant and expansive proselytism, directed to the unfaithful persons and the frontier hostiles. The obligation of the Jihad was similar to other “five basic rules or pillars of the Islam”. The Koran given to Mohammed in the birth of the Islam, has numerous verses or aleyas that demand the armed fight to the faithfuls ones.

In the side of the mundane interests, the extension of the Arabic conquests, in his uncontrollable advance during more than one century, brought the control over the goods and households of the new and numerous subjects and the political and military power on them. The Moslem domain was established by the presence of a governor with his military garrison, in every conquered important city or region. The relation of the new subjects with the Islamic regime was establishing and regulating by the payment to the governor of the periodic taxes. Owed to the imposed subjection and for practising, by the moment, a different religion. This flow of important and constant money began to come to the conquerors, who established diverse intelligent enough mechanisms for his distribution. The third reason, attainable to the nobles, chiefs and more out-standing Muslims, was the distribution of the quotas of power.That were generating the domain, the defense and the governance of the new territories of al-Islam. That are the lands of the domain of the Islam, the lands given by Allah to his faithfuls, the lands that they must keep or recover, if they are temporarily snatched. This way, the emirs, sheikhs and caids were proliferating, occupying and shaping the political Arabic structure of the islamized territories. VISIGOTHIC SPAIN WAS CONQUERED IN A FEW YEARS, BY FEW MEN AND WITHOUT MARTYRS… PROBABLY WITH THE HELP OF THE POWERFUL HISPANIC ARRIANS…

The Arabic original tribes of the Islam were receiving a part of the taxes and of the plunders of the conquest, though they were not taking part in any military expeditions. Another part was given to the participants in the Jihad against some bordering people or region with the caliphate. An important part belonged to the authorities of the Umma, centred on the caliphate of Damascus or of Baghdad, and regionally represented by his emirs or caides, to support the expenses of the governing and the maintenance of the theocratic State. From the later was stemming a part destined to pay, equip and forming up the new Jihads, towards the frontier territories of dar al-Islam, that were appearing. Finally, there was the Zakat or the canonical alms, given to the ulemas and muftis. That had as purpose to solve and compensate the Muslims for the punishment and the randoms of the life, with the contribution of their community. And that was distributed to the poor, the disabled and the patients, the orphans and the widows of the Umma. This was closing the process of distribution of the wealth and the power. That was mundanely welding and assuring the religious aspirations of the believers of the new faith.

Strategic contradictions of the jihadists in the irregular war.

The principal characteristics of the irregular war are his prolongation in time, consequence of his low military intensity, and that is civil and political. What imply a great social tear and inevitable acts of great cruelty. By the «ascent to the extremes» of the war, which Clausewitz was saying, without the safeguards of the laws and accepted customs, that get lost in this «born within itself chaos».

To reach the power or his strategic aims, the guerrilla has three aims in his total strategy: the military annihilation of the enemy, who can be simply appearing his disability to solve the problem of the bands in an acceptable time for the popular enemy rear; the destruction of the military and economic infrastructure that supports it and the capture of the people or of his religious, ethnic and/or social base to his ideas. In this dialectics of wills, ideologies and efforts the strategic aspects of the irregular bands of any ideology are three: the guerrilla bases, his forces correlation with the regular enemy and the communications in general.

The deficiencies and miseries of the jihadists, in relation with the strategy and the operative strategy are:

1) The jihadists have failed in actively and firmly joining to a social large group, which gives cover and permanent impulse to their «imperialistic social religious movement». The most mentally ill activists are slowly isolating themselves (at least, emotional and ideologically) of the society in which «they live». And they do it in altars of his violent methods, to which they sacrifice everything for obtaining the efficiency in the action. They continue to be prepared a process of segregation, purification (in his unexpected not orthodox rites fast, use water from sacred places and green, yellow or black banderoles with inscriptions of the aleyas that favor them), consecration and radicalization. This «catechizing of the violence» allows them to mentally come to the glorious and in peace death, and, even to the suicide, in the accomplishment of his punctual actions.

2) The jihadists groups act with an unnecessary and indiscriminate brutality, which discredits them before his religion and unquestionably separates them of the pure Muslims and, still, of the normal ones. Let’s see some aleyas or verses from the Koran:

2, 10 » When it is said to them: do not commit disorders (voice that defined the crimes) in the Earth, they answer: Far from it, we introduce in it the good order (the Good)».

28, 77 «As Allah makes the Good, also make you the good and do not foment the corruption (the Evil)» (murder of innocent and of peoples that receive you -the lands of dar-el-Ahd-, drunkenness, drugs, unnecessary damages of the things).

They despise and not comply with these moral aleyas, without Allah had changed them for they. Sura 2, aleya 100 «We do not abrogate any verse of this Book, nor we will make erase any one of your memory, without replacing it by other one equal or better».

3) The absolute absence of venerable and pious ulemas and muftis in their side.