Almost by definition, the military and police available means in an internal war against the armed attackers are very scanty. And, even, they can be scandalously insufficient. And this does not depend so much of the security forces, not of the established authorities, but it is a direct function of the inherent strategy to a correct terrorist process. The number of possible, potential aims, which offers an organized modern society, more or less developed, to the solvent operational strategy of an armed insurgency is almost countless and inexhaustible.

The targets of the sociopaths sworn-in in the rearguard civil areas.

Attacks to civil and religious authorities and to isolated members or little groups of the armed forces and policemen. Acciones coactivas y punitivas contra los colaboradores y espías de aquéllas. Coercive and punitive actions against the collaborators and spies of those.

Destruction or incapacitation of directly economic means of all sizes and importance: mines, plantations, industries, shops, hotels and resorts, groups of tourists. In these cases the insurgency must value the direct loss of working places and the probable alienation of part of the popular sympathy towards it. The effect is similar if there gets depressed the economic activity, but the employment is not destroyed directly.

Direct assaults against the population for, demonstrating the vulnerability and the defenselessness of all, to spread the irrational fear in the social attacked target, affecting his political and religious decisions. Generally, they will use explosives and the fire of automatic weapon, in infinites «mixes» or combinations in the practice, attacking places of great human concentrations. Where the aims are the human spread set and where it is not necessary to lose action time selecting them. 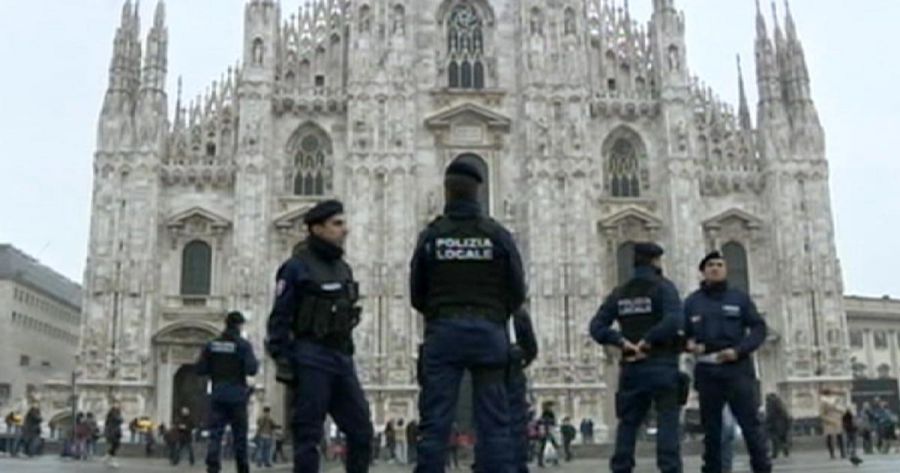 POLICE PROTECTION OF THE DUOMO PIACE, MILAN. ¿WHICH IS THEIR «TARGET»?

Assaults against churches, mosques and synagogues in celebrations periods. Attacks to the peregrinations of the enemy religions and to their rest centers in them and of worship. Assaults in the parks, avenues, great streets and concentrations during the leisure, the holidays and social celebrations of all kinds. Assaults to the malls, markets and commercial department stores; the theatres, cinemas and auditoriums; the bus and railroad stations, the civil airports and the means of transport; the principal school centers and the offices of the public administrations.

This way, the terrorist attackers exert with his possible and remote presence, which must be always active, an effect of generalized grieveness in the modern societies. Whose members devote themselves to the production and purchase and sale of goods and services. And do not understand well what threatens and happens to them. An invasive action happens in the societies, working as an invisible and subtle gas, that has corrosive and pernicious properties. That penetrates and reaches everything. Demolishing slowly the defensive foundations of a civilized society, not trained for her defense.

The vigilant action of the policemen and military men.

The security agents, who guard here numerous «critical points», «sensitive areas», «strategic zones» before the observation of the present or pedrestrian public, exercise a deterrent, passive function and action. They try to avoid directly that the sociopaths attackers operate in them. And their active task is to look at short and medium ranges, the particularities, behaviours and characteristics that certain persons exhibit. That determine them as «suspects» and whose identification is immediately communicated to the companions in the area. And that allow them to center in them and in the follow-up of their immediate activities.

But, the «appearances» can remove of the objective reality. The Arabic features of a person, for example, will attract nowadays the interest of the security agents. Though the Arabs do not get a third of the Muslims of the world. And though the frantic rash of al-Shabab and Boko Haram are blacks. This way, the Turks, almost 85 million Muslims of sunni faith, that of the armed assassins, are more caucasian, as the Europeans. And they would easily passed as them. The Turks always insist before the foreigners, in emphasizing that they are not Arabic: of skin soft ocher/sallow colour  and thick lipers.

To overcome the men natural repugnances to commit an outrage against others people, it is necessary to temporarily appease and neutralize the normal human instincts. Let’s see some motivations used for it.

A «negative» motivation is the chronic loss of the basic natural needs: sustenance, family, safety, refuge and cover, expectations and reasonable progress. It is an effective spur to induce the employment of the liberating violence to a part of the society, specially the idealistic young men. The «positive» motivation would be the economic prizes that different radical Islamic organizations give to the families of the martyrs. And these are the fallen in combat against the ufaithfuls. Following the way towards the human psychology and soul, the religious motivation is another powerful mean of conviction and rooting. The followers of the Jihad are methodically and intensely catechized. The Koranic verses related with the Jihad, are known by heart by them. The other fighters «example» surrounds them in their daily life. In the way of photos, manuscripts, testimonial videos and destiny companions. Their preachers, we refuse to call them imames, clarify their doubts and encourage them to prematurely reach the Paradise. That is destined specially to the martyrs of the Jihad. That are those who die in the way of Allah.

A «ideologist» of al-Qaeda, Abu Yahya al-Libi, developed a theory of «religious» base on the «not looked hurts», related to persons. According to her, it is allowed to their militants to kill Muslims when this is inevitable. And sometimes, more than that, when it is also useful. This way, in a message where they assumed the authorship of an assault of August, 2009 in Baghdad, al-Qaeda wished a rapid recovery of the wounded sunnis and expressed her hope that the dead men should be accept by Allah also as “martyrs”.

Locating, hunting and neutralizing them…

There are practical problems in the location and neutralization of the Moslems living in our countries during their violent radicalization process. We can identify potentials jihadists with certain sureness and after a specialized and methodical work. But we cannot detain them, while do not commit an offence during their activities: to try to arm and to train them; to conspire with others in his actions; to create bands structures to commit offences; to spread the exaltation and the use of the violence as ideological weapon; the militants’ recruitment for their ideological and armed radicalization; to gather funds for the organizations with intention of committing offences; to collaborate in the movements of politicallly active and possible militants in their trips towards the interior (countries of the Southwest of Asia, the Magreb and the Sahel) or exterior (enemy western countries: the «crusaders») Jihad.

SEE HIS LOOK. HE WANTS TO KISS YOU…

As for the intelligence labors, great difficulty exists in the penetration of the islamist networks by own agents or collaborators. In general, the mujahidins, the sympathizers and collaborators: usually speak Arabic; do not belong to European or Spanish Americans races; the Moslem civilians do not collaborate in the tasks of espionage and reconnaissance against the armed islamist organizations.

On the other hand, the glamorous exhibition of pairs or groups of armed military men by the streets of the cities is operationally useless. Since they do not have a definite hunting target. His mission is the ostentatious and indefinite patrolling. Seeking to calm the pedestrians parishioners with their menacing own presence.

What do we still have? The information turned into intelligence. That must be contrasted, taken part to all the authorized agencies and user groups (including foreigns), constantly updated and necessary and sufficient. Excluding the undue plethora of excessive, routine information, not elaborated as intelligence. That is a way of poisoning and boring the own commands at all levels.

When the individual has done the psychological and volitional step (the «decision»): already has broken the sufficient bonds with his vital environment; including the family. And his mind is absorbed and directed to his new “situation” and to the offered and assumed identity. This way, he is almost irrecoverable for himself, for his family, for the society.

If the individual is one more of the «disoriented», emotionally confused and not integrated people. That are mental besieged by the resentments produced by the long-suffering, or believed as such, «offenses»: it is possible to recover him, is relatively simple to do it and is enormously laborious to obtain it.

The enormous necessary work, prolonged in the time, does that it could not rehabilitate all. It is necessary to fight against the inequalities that have mentioned. To look for temporary works is more rapid. To give them an education and a labor formation is slower. But it is indispensable in the medium and long term. To separate them of the «rotten suburbs» and of the pernicious influence of environment, friends and relatives, is very complicated and long. Because the «chunks» extracted from these, have created the poor and only identity that they have. That takes them to the personal and social failure and to the frustration.