The American and European troops are prepared to fight against a regular military enemy provided with a masses army. Or even more modern, of the IIIrd generation, with more elaborated technologically means and better trained men, to support the lonelinesses and tensions of the awaited current battlefields. Definitively, his «way», his action space, is the direct and opened clash in presence of a great profusion of probable enemy targets. His instrument is the attrition, the destruction of the aims that the enemy presents and could be detected and acquired in all the depth of his march or assault deployment. The last two enemy echelons, nowadays increasingly remote or deep, are reached by the longe range support aviation or with the ballistic or autonomous missiles of medium range. Which is here the role of the man? To detect and confirm the enemy targets, to try to fix them, if it is about a patrol or a small combat unit and to call his «ordnance» in order that it devastates them. Only his elite units, always scanty and, therefore, exceptional and precious, are formed in the nearby infantry fight using only his organic means.

In Iraq and in Syria the islamist bases are always in the cities and populations more favorable for the activity of his different bands. And they are surrounded or permeated by military local and foreign forces. Already initiated the war, the North American intelligence intercepted a memorandum of 17 pages written by Abu Musad al-Zarqawi, former chief of Al-Qaeda in Iraq, to Osama bin Laden. In it he was expressing his worry for his survival: «In Iraq there are not mountains where we could shelter, nor forests in whose thickness we could hide. There are spies eyes everywhere. Our backs are exposed and our movements are realized in view of all». And this geographical military space is similar in Syria.

The Action of the military Forces against the current Insurgency.

In the books on the guerrilla warfare, it is discused of the tactics of the siege to the military fixed or semipermanent positions. The guerrillas, deprived in the first phases of an ideological armed revolution (communists, of fight against the foreign occupant) of enough military capacity, have their guidelines to attack the mentioned military positions. In the zones not dominated by the guerrillas, but bordering the areas under his control, it is where develops the fight of those for removing the military enemy. Seeking to also control these areas and to realize in them his ideological indoctrination of the populations. The guerrilla bases only can grow in space or increase his number, when the military enemy moves back. Or when his positions (advanced positions, barracks) are submitted to a more or less nearby and ferreous siege. That must be continuous in his effects: that is to say, controlling the approximation and exit routes of those. To threaten, harass, check and to attack in its moment the surrounded forces. And the reinforcement and supply columns of that come to help. Using limited attacks, ambushes and traps and registered fire bags.

In the regions infected by the guerrillas, not necessarily occupied by them, the military positions are protective, extensive and few fortress. His garrison is high. The military set evokes there a blind, awkward and low mobile bunker. The military men realize from them special forces operations of reconaissance and against guerrilla positions and of march to the combat on targets of zone, at charge of strong columns. To occupy and then defend them, according to the capacities of the military forces. In this, the commitment and moral of them is decisive.

In the irregular war against the bands of the Islamic State, the armed forces and his auxiliary ones use in his operational strategy, some of Mao Ze Dong’s 10 military principles to direct the tactics of the Chinese guerrillas and semi regulars. Those were enunciated by Mao on December 25, 1947 in his speech before the Central Committee of the PCC. Let’s see, in not necessarily original order: 1) To attack first the isolated and spread enemies and later the stronger enemy forces. 2) To take first the small villages and, finally, the big populations. 3) Not to fight combats, if you are little prepared for, nor present combats in which the victory is not sure. 4) To concentrate always for each combat forces absolutely superior to those of the enemy. 5) To destroy the enemy while it moves and is more vulnerable. 6) To use the intervals between campaigns to rest and to regroup and to train the troops…but not allow that the enemy have a pause, not even a breather. 7) Take first the populations low defended. And, when the conditions are favorable to us, those with medium defenses. And wait to increase our advantages, to assault the better defended cities.

This operational strategy outlined by Mao, using simple, didactic and efective procedure, is of a low military level. As corresponds to an insurrection that had to grow, to develop and to spread. And that was employing rural uncultured forces and was arming itself principally with the enemy captured weapon. Mao said that he «had a call option in the weapon of the British arsenals». 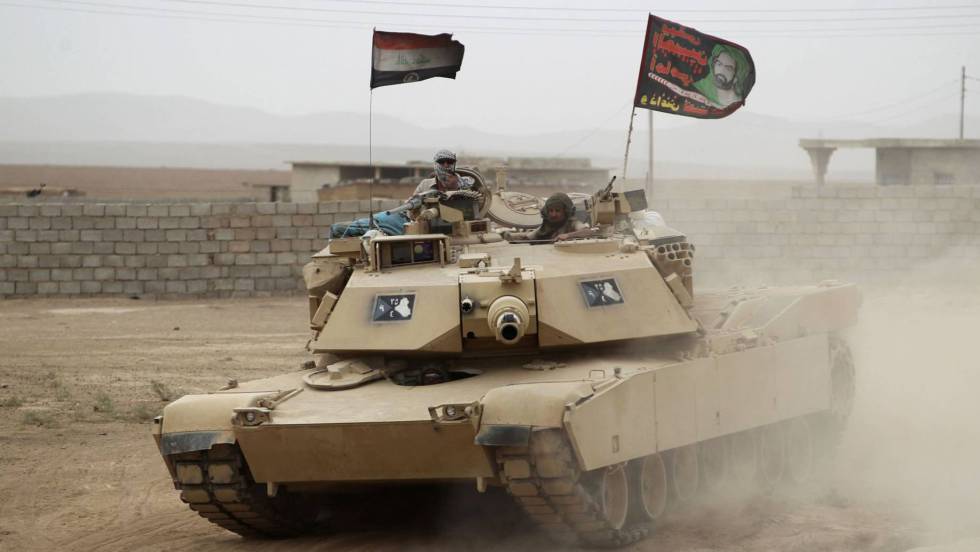 But this same orthodox operational strategy of the weak rebel against the strong military, is that are going to use the Allied forces, agglutinate and supported by the USA and Russia (in Syria), to attack an islamist insurgency, entrenched in his urban bases. And keeping the massive, repeated and overwhelming employment of the modern air and ground heavy fire on the rebels. So much in the battles and combats that appear, as for the wear and interdiction of the islamist positions, his facilities and movements.

Seeking as strategic aims to defeat the rebels and to occupy his bases or positions. That would be finally select for a policeman’s labor. Bases that are the only hard, definite and static aims, which the guerrillas have. With a qualitative difference with the diffuse, evasive, fleeting and slippery aims that the guerrillas offer in movement. Bases that are directly attacked, using the military forces (to those that is supposed better trained and equipped and, at least, equally motivated, that the rebels) and his enormous power of direct and indirect fire. The military and social problem that exists here is that the Allied rebel Arabic groups, the Kurdish peshmergas and the Iraqi military men and his loyal militias, lack the military virtues of the National complete armies. And they have acquired not military habits on the preservation of his men in combat. Avoiding them at any price the mutilation and the death. In It have influenced decisively the religious and social origins of the different «allied» soldiers groups and his interests and divergent aims, at times even antagonistic, within these two civil wars. Social elements and parameters contaminated, spurious and, even strange, before the concept of the Umma or community of faithfuls of the same god, Allah. They follow for it this operational strategy of going very little by little, first occupying the weakest islamist positions that surround and defend the biggest. Devastating with the heavy fire from the distance the islamist disclosed positions, which are intermingled with with the houses and refuges of the civilians. Because the war they do, so much the Americans as the Russians and all his allies, in the urban fighting areas that are the islamist occupied populations of Iraq and Syria. And the prolongation of the war, the major time that they will use to obtain his military aims, preserving his men in the combat, the civilians will pay it. With his blood, with the destruction of his material means and buildings and with his massive displacements, seeking to save already only the life and without knowing who will receive and help them.

Let’s see a historical example of the action of counterinsurgents forces, in high unfavorable conditions for them. The German forces antipartisans in the USSR always tried not to be forced by the guerrillas to the passiveness of the garrison or the escort. In his manual of «War against the Bands» they were establishing that “the initiative must be always ours. Even if the commander only has a small force at his disposition, he must not show failures in his resolution. If it is possible, every action of the bands must be answered».

The Germans not only were prevented in his operations against guerrillas by a men’s habitual inferiority. But, also, for the heterogeneous quality that they were having. His antipartisans troops were consisting always of variable combination of forces of diverse origins and qualities: borders troops and German troops of security and policemen; security troops of his Allies in the front of the East, specially Italians and Rumanians; and a high-colored mixture of Allied «Russian» forces of security and of self-defense, sometimes, insafe. The hard core of the units were the Germans. The posts did not have homogeneous troops. In them, the men’s qualities were intermingled, in order that mop or novice was encouraging by the presence of the strong, and in him was removed the thoughts of weakness or desertion. 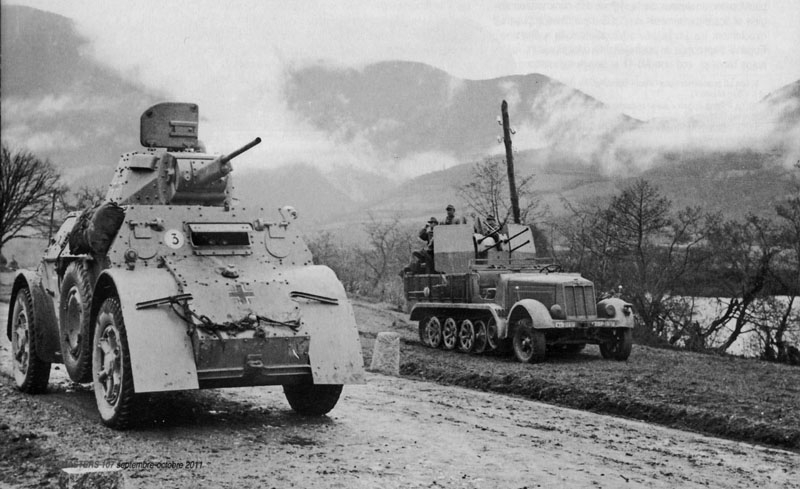 Before the inability to provide troops and security to his rearguard in the whole territory conquered to the USSR, at the west of an imaginary laid out between Leningrad and Stalingrado, the Germans had to select very well the points of garrison. These rarely had more than one platoon of counterguerrilla forces. In addition, it was thinking that with 4 or 5 men, the post could be defended for a time. While, others, in 1 or 2 patrols, were going out to chase the partisans in the nearby villages, to monitor the vital line of communications or to support other positions. When new units were created or if there was a temporary «surplus» of antipartisans forces, there were formed reconnaissance and combat patrols. Something like reconnaissance in force patrols, to locate and harass the guerrillas. When it was necessary to realize an offensive major action, against a guerrilla threat or the location of an important bands concentration, even there were temporarily brought troops from the forward line (of the operational zone), for the assault and destruction of that one, generally looking for his siege and annihilation.

It is true that the German results were limited. And also it is true that the principal operational aim of his antipartisans forces was fulfilled. The lines of supplies were kept reasonably opened from Germany, Poland and Romania up to the rears of the German forces and his allies in the East. And the flow of men, armaments, equipments, supplies and goods that received was constant. To allow the gigantic effort of war against the almost inexhaustible resources of the USSR. Millions Soviet prisoners were sent to the Reich and towards there there came back countless units and men of the Wehrmatch, in his continuous rotations.