Subodai concentrated his army in 3 groups of march. Each one would enter Hungary by a different route, across the mountain passes and valleys of the Carpathians. This deployment was given to the Mongols more resistance to the enemy surprises. And gave them an initial unfolding for the maneuvers of their 3 mobile corps, facilitating them to face the enemy. The Hungarians, for their part, did not dare to attack any of them, for fear of an advance of the other corps on their rear or to occupy anyone of their cities. The central column, which was under the command of the prince Batu, crossed Ruske’s mountain pass on March 12 and continued his advance for the valley of the Tisza. His vanguard with combat capacity came to the Danube on the 15th and 2 days later the principal corps did it. The vanguard had realized a march of 290 km in 3 days, crossing an hostile area and still covered by high snow.

On April 3, Subodai formed his 3 columns in front to Pest, in the east bank of the Danube. In Pest the king Bela had assembled his army of 100 thousand men. At another side of the river, joined both cities by bridges, was Buda. Subodai knew they were overcome in number by the Hungarians. Having also detached a tumen in Transylvania the left column of march, to assure that the Christians were not receiving reinforcements from Romania, the Mongols were now 70 thousand. Also, it was very dangerous for them to force a crossing of the Danube at the sights of the Hungarian deployed army.

On the other hand, the more time Subodai was taking in his calculations, decisions and preparations, the more time was giving to other European leaders to decide and to come to support the king Bela. The Mongol general applied then at strategic scale one of his tactic stratagems: his army moved back towards the East. The Hungarian chiefs supposed that the Mongols were not daring to fight against their army. And, spurred by their stagnation before the not hindered advance of the Mongols 3 marching columns, asked to initiate his pursuit. The Hungarians did not notice that Subodai was attracting them out of the protection of the Danube and of the support between detachments and the army corps.

The king Bela, commanded the great majority of the army, directed the pursuit. The Mongol retreat was calculately slow. They took 6 days in reaching the Sajo river, at 160 km at the North-East of Buda and Pest. And, at the west of the river, near its mouth in the Tiszna and in the plain in front of Mohi, the principal city of the zone, Batu and Subodai decided to confront their «persecutors». On April 9, the Mongols crossed a broad gorge, advanced by a heath, crossed a stone bridge and continued 16 km up to the bushes placed at the west of the hills and vineyards of Tokay. In them, they had numerous places where to camouflage or to hide. In effect, when a Hungarian reconnoissance detachment followed them that evening and came up to Tokay’s west, it did not find absolutely nothing. The Hungarian army, who realized a frontal pursuit, encamped in the heath, arranging his cars, joined by chains and ropes, closing a circle, where installed his tents and mounts. At the right of the camp, were the marshes of the bank of the Tisza, at his front, the heath of the Sajo was spreading and forests and hills were covering his left side. 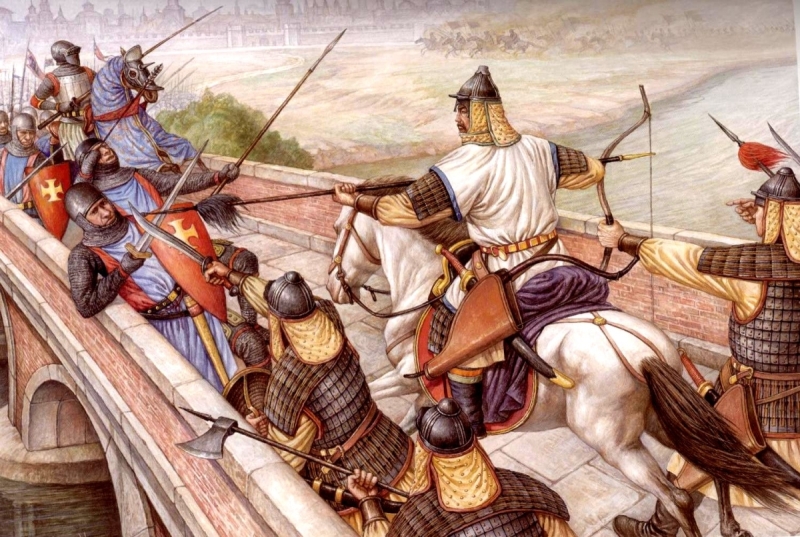 FIGHTING ON THE BRIDGE.

At dawn of Wednesday, the 10th of April, 1241, Batu and 40 thousand men threw towards the stone bridge by its east side. The Hungarians defended it with all energy, until they had to withdraw for the fire bombs of that the Mongols catapults threw them, on having been in a very narrow fighting sector. The Mongols went on to the west side, but during more than 2 hours, were terribly pressed by the Hungarians charges and only the shots of their archers briefly restored their defense line. Little by little, the Hungarian army deployed to liquidate the Mongol bridgehead. Suddenly, the general Subodai, who also had crossed to the west side by a circumstances bridge stretched downstream of the Sajo, while the Hungarians were distracting with the threat in the bridgehead, appeared with 30 thousand Mongols on the Hungarian rear. Struck and stunned, but with guts and experience not to fall down in the panic, the Hungarians moved back in good order to their camp. But the Mongols threw to it, surrounding almost totally the camp and covering it with incendiary bombs and arrows. Which were burning the load coaches and the tents and frightened away the beasts, spreading chaos between their enemies and undoing the autoconfidence of the Hungarians.

The Mongols prepared to throw a charge on the uncohesioned groups of the Hungarian army. But they continued without finishing to cover with any detachment, the siege to the camp by the access gorge to the heath. The Hungarian knights with enough moral courage yet formed a wedge, to resist the charge; it was the last firm resistance of the Hungarian army. But the majority of them moved back by the existing «gap» in the siege, fleeing in small groups towards what they were thinking that would be their salvation. And really falling down In a mortal trap, which was spreading over the whole route of their flight towards Pest.

The Mongol light cavalry, without risking anything, softened from a distant with his arrows the driven to despair deployment of the knights and, later, taking his opportunity, the heavy cavalry charged to squash them. Numerous Mongol light detachments went out in pursuit of the fled ones. A part them was pressing on their rear, to increase their commotion, their chaos and their fear. While, other detachments realized the overflowing pursuit, reaching them from the sides and spearing them or throwing their arrows to them with their small and most powerful compound arches, which shot from the mounts. Along 50 km, in the way of return to Pest, spread the remains of the Hungarians, their mounts and their equipments. More than 70 thousand Hungarians knights and auxiliary died in the battlefield, in the camp and in the escape towards the southwest. After the battle of the Sajo, the Hungarian resistance collapsed.

The Mongols immediately attacked Pest and burned it. But they did not dare to cross to the west side of the Danube in the exploitation of the success. In spite of the moral and numerical supremacies that they enjoyed in these moments. Batu and Subodai gave rest to their army and consolidated the positions at the east of the great river. And so more than half a year passed, where the principal related event was a slightly spirited declaration of Crusade against them from the Pope, of which it was obtained little in the practice. In December, 1241 the Danube froze in this great region.

The Mongols made good use of their time to plunder Buda, realized a reconnaissance in force in Austria and sent a detachment to the South, towards Zagreb, in pursuit of the king Bela. And on the 25th they assaulted Gran, the Hungarian capital and See of his archbishop, taking with them everything of value and antiquity they could.

A marvellous End for Europe. Who, What for?

Central and Western Europe were mature for a Mongol invasion. The Europeans did not have an army capable of facing this threat, which already was throwing them the breath in his napes. The strategic plan explained by Subodai to the Khan and to his generals seemed to be faithfully fulfilled up to his last parts. But, this was already only an illusion, the impossible one. An «appearance», which Sun Tzu would say. On December 11, 1241 they had received in the headquarters of Batu and Subodai an escorted messenger from Karakorum, the Mongol capital in the Eastern Asia. He was bringing the news that Ogadai, the Great Khan, had died and that his widow was acting as regent, until a new Mongol emperor was elected and promoting to the throne. The Mongol present princes were anxious to make worth their rights for the succession and decided to return to their capital, taking with them the imperial tumens.

Batu knew that without these select troops, he could not keep Hungary in his power. But he thought that with the Turkoman recruits, who already were experienced and taken part in combats, he might keep most of his territories. This way, the Mongols evacuated Hungary, without being hindered, harassed or pusued by their enemies. Though behind they left the land that was theirs. This was a symbol of their idiosyncrasy and exploiter character up to the extinguishment, land bandit and absolute predator. And without the minor aptitude to create, to keep, to develop, to extend and bequeath his successors, a civilization that was deserving this name. And not only to leave them the accumulated results of his outrages, bails, taxes, plunders and booties and the military educations to obtain them.

Batu returned to his departure field base, in Sarai, near the Volga and at scanty 100 km north of Astrakhan. And there established a Mongol subsidiary empire, which was known as the Golden Horde. The Mongols would not have another equal opportunity to invade Europe. After this aberrant nightmare suffered by the Europeans, these invented all kind of stories and myths, in which they narrated how they had defeated the «Tartar» invaders (this way they in general knew the Mongols) and had forced them to return to their lands.

This unthinkable, sudden and happened, in the last possible moments resulted… marvellous, Was it a matter of Destinity and of Europa’s Karma and his privileged Civilization? ¿Or was it the result of a Divine Intervention by the intercession of the Holy Virgin Mary? Certainly, humanly was an excessive and incredible chance. But the faith can never give some «evidences», because it would stop of being and would turn into the verifiable reality. The Divine effective intervention, in favor of Europe and his civilization, which without the Christianity operating from his marrow, would never look alike to what it went and to what is. But It is probable, because That is never thundering or overwhelming. God did not visit Elias in the beams storm or in the hurricane-force wind, but using a tenuous and soft breeze. And, to the esoteric and sincretists, the explanation might be «a cosmic action of the astral and akasic forces, in favor of the Light, the Peace and the human Civilization, towards the top levels of the Universal Conscience «.

Also, there exists a «rational» and common explanation of what happened, but that cannot specify the moment to begin this opportune retreat. The Mongols and the central Asiatic associate tribes were creating an Euro-Asian empire in the first half of the 13th century. But their material capacities and their ideological and religious resources were not corresponding with such important aim. As already we saw, for the peoples of the occupied countries, they did not have anything satisfactory and lasting to offer them. The Mongols were kept in these foreign lands by the threat of the known terror. As it would happen with other tyrants, that tried to become «worldwides», their necessary collaborators were ethnic or ideologically similar. But the Mongol etnia and his related ones were demographically insignificant, to be able to monitor and defend alone such vast empire. All this, in the decades of the invasion of Eastern Europe, had tightened up to the point of break their military capacities. This way, more early that late, the Mongols had to realize that retrograde general march, to assure and consolidate their lands in the East of Eurasia. Moving away from the contact with dynamic, Ideological and expansive civilizations, as the European. With whom the relations of vicinity and the first exchanges of merchants, explorers and adventurers would been solved by the military clash.