And this is the gravity center of the fight against the solitary wolves. To preventive and isolately hunt them is very difficult, because they scarcely do not leave tracks. It is necessary to fight against the necessary instigators of their ideas (persons, companions, mass media of all kinds, trips to their foreign centers). For it, is necessary to adapt the legislations, as it has been done against the family mistreaters or the financial refined crimes, supported by the immediate communication and on line. Without harming with it the due detection and following-up by teachers, disciples, communications of all kinds and their holes.

And of this, as almost all, we have exceeded experience. In July, 1884, the liberal government of Sagasta, implanted the first Spanish law against the attacks with explosives, generally carried out by the anarchists. In her, his instigators were rightly punished; not only the material authors of the outrages, but also its inducers.

The ideologic Adaptation of the Jihad to the present times.

The Islam has to assume that the Jihad was necessary for the establishment and the defense of the believers’ primitive community. The Prophet establishing the Islamic state from the violent destruction of the jahiliyya (the existing barbarism previous to the Islam Arabic). And even the Jihad could be useful for its rapid extension through the world, according with the existing condition of culture and development of the medieval civilizations. But its historical opportunity does not exist nowadays and then it must be replaced by «another type of EFFORT in Allah’s way», the Great personal Jihad. Which concept already exists in the Sunna and that might be recaptured and proclaimed by the ulemas and the pious muftis, which are the ideologists of the real and everlasting Islam. And, certainly, those enjoy the most ample political, social and economic independence: they are respected and/or fearsome by the governments in their respective countries, and usually are those who administer the Zakat or the canonical alms. 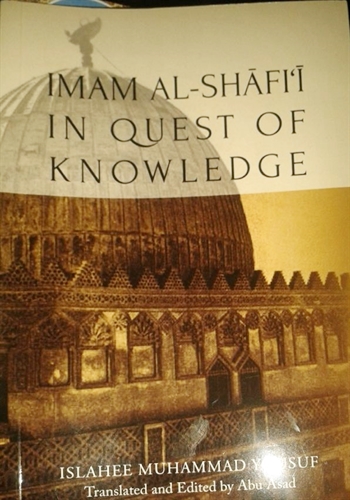 AL-SHAFII, LEADER OF ONE OF THE ISLAM’S IDEOLOGICAL SCHOOLS.

Since the emergence of 4 principal ideologic Sunnis schools, the principle of the personal reflection effort, the ichtihad, got power in the Islam. The ichtihad is going to allow the development of the Arabic culture, so much for the civil aspects (sciences, trade, literature, art), as for the enrichment of its ideology. It is the base of Islamic lawyers as al-Shafii. The ichtihad is a source of brilliancy, creativity, enrichment, progress and peace in the way of the personal and collective effort towards God (this is the nucleus and the reason of the Islam), when already the Umma has spread and multiplied enormously through the world.

THE «GREAT OR INNER MOSLEM JIHAD»…

But, circa the XIth century (V century from the hégira or march to Medina), the doctors of the Law close the door to the ichtihad. The methodological Islamic approach alters: from then, it is imitating, repeating and abusing of the compendiums.

The Needs of Renovation, Commitment and Action in the Islam.

In the face of his own terrorism (war actions against general, innocent and indiscriminate targets), the Islamic world is paralyzed and do not knows what to say or do. The spokesmen and intellectual affirm that the Islam is peace and tolerance. But this is not totally true. As we know by the facts and the omissions in its disapproval and ostracism. The majority of the Muslims take away from the attacks for opportunism, to protect the Islam, worried by the increasing rejection that it suffers in Western countries. But, when do the ulemas or the muftís intervene in the polemic? Almost never…

Never was carried out inside the Islam a deep reflection on the political and religious opportunity of the violence. Does someone know Islamic active pacifists? It is not the case that the intellectual laymen Moslem react. These are not operative in the way that we know in the West, since for a good Muslim the politics, the society and the religion form the only, exclusive and inseparable Trinity established by Allah. Besides, the social and political failure of the intellectual laymen Arabs remains tied with that of the nationalistic, leftist and Europeanized elite, that stimulated the independence of the different Arabic nations after the World War II. And that created lay, «socialist» regimes rested on the clientism and the internal repression and separated by his ideology and interests from his respective Moslem societies.

Some actions by the spiritual chiefs of the Islam are attainable and they would be estimated by all. The ulemas might declare that the interests of the Islam and of the Umma have Spain and the rest of Europa as good friends, as part of Dar el-Ahd. That are the countries where the Umma does not dominate politically, but that is in peace with his inhabitants and can realize his actions and rites. The ulemas might use the institution of the takfir against the most recalcitrant, dangerous and criminal terrorists. Those who act turned aside perversely (maliciously or after being reproached by those without results) In name of the Islam. And they have not done it historically for the paralysing fear to falling down in a destructive and solvent spiral of mutual and multiple reproaches within the Umma. Let’s remember that the monolithic religious unit does not exist in the Islam. In which the people, in addition, has free access to his «submission to Allah», with only reciting the Profession of Faith. That would be equivalent, in certain form and measure, to the Christian baptism.