The social Situations of tensions and clash.

There is a deep social fracture in Catalonia, where both «conflicting groups» form both antagonistic halves of his society. By the force, it is not possible to impose any of the two ideological parts over other, because the positions are anchored and held. This way, a violent clash only would lead, by the friction and the wear generated, that the falls of both groups were almost similar. It is not possible here to obtain the Roman «caedes«, in which the «defeated» was passed to the «edge of the sword», whereas the «victor» only suffered light falls. 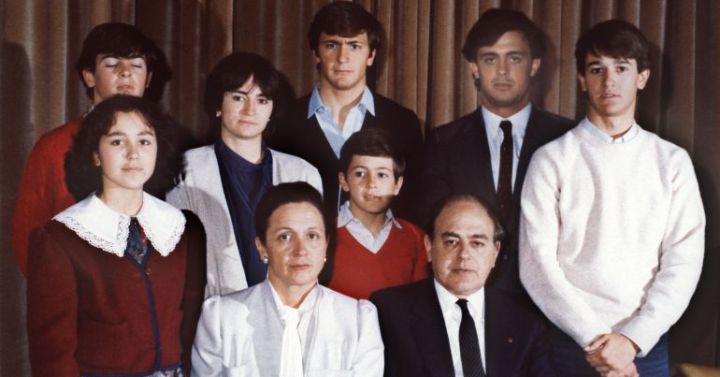 THE DRIVING FAMILY OF A SPURIOUS CATALAN NATIONALISM, DEFENDER OF A PLUTOCRAT HIGH CLASS AND FAR FROM THE REAL HISTORY OF SPAIN AND CATALONIA.

And it is not a question of distinguishing between «goods» and «bads» either. Because the interests and the ideas that sustain them, are divided simply in «favorable» and «unfavorable» for both social politics causes.

The interests, the attitudes and the divergent ideas, when not opposed, feed and support those positions. And a first embarrassing great mistake of the authorities is to have allowed that this situation generated and degenerated. Largely, yielding social essential functions of the State (as the public education) or giving large budgetary money, to obtain the votes of the separatists, who initially were autonomists and moderated, supporting the governments of Spain, of the PSOE and of the PP.

The civil clashes in Catalonia, arisen between groups of activists of both politician social signs, are varied and of different seriousness: placement and retreat of the yellow bows or announcers cartels of events; occupation by «pushing groups» of the CDR, ARRAN or others, of the places where there were going to be celebrated acts of other groups or conferences of not related persons; irritating frets between groups of demonstrators of opposite sign. In the actual situation of irritated clash it is only a question of time and of the repetition of these acts, for the violence installs in them. This social degeneracy is a consequence of the inefficiency of the State Central Power and the abandon of his governing functions. Leaving in hands of the judges, the defense at the wrong time of an autonomous and penal legality infringed by the opportunists secessionists.

When, in the middle of 1996, Umberto Bossi, leader and senator of the North League, a radical right party created around the mantra «Rome steals us«, announced for 15 of September the secession of the Padania of Italy, a social politics aberration opened in the valley of the Po, he received the following notice from the president Oscar Luiggi Scalfaro: «Mr. Bossi, if you continues this way, you will collide abreast with the Italian Army».

The North League stopped his delirious aspirations. And his vital path passed until not much, emerging or submerging in the Italian political panorama and with meanders. It was not necessary to take exceptional measures then, nor hard, against the North League or his driver controls.

Because, when the institutions and his protagonists are respected, this, «per se», takes care and defends the Lord’s vineyard. And, vice versa, when they are disrespectful to you, already you can threaten, dribble, feint, get furious or cry. That will serve you for nothing. Because, the attributes of your authority and the causes and reasons of the national sovereignty, which you say to defend, already you have lost them. And, the offenders already have despised, put away and replaced them with others. That turn out to be nearer and suitable for them.

After the outlawing of the secession, inside the juridical frame existing in Spain, there are different tasks to realizing by the whole State apparatus.

To neutralize the street activists, anonymous or not, placed in the diffuse limit of the violence. In order that they do not harass, disturb the social and streets order and do not prevent the political activities of other formations. It is a labor of immediate public order.

To eradicate of the Catalan society the thoughts and the tendentious and distorted anti Spanish beliefs. Or that which promote and encourage the social division and the hatred and the elimination of the political rivals. It is a multidisciplinary and complex task, with educational, psychological and social components to realizing in the middle and Iong terms.

To change the political solvent conducts. Stopping and substituting the autonomous authorities that break the laws of a Constitutional state, internationally recognized. It is a task of institutional and legal regeneration of the autonomous and local institutions in the medium-term. And that demands the approval, decision and support of a majority of political parties and citizens

If this is not do, the recalcitrant separatists will hide and come again to other autonomics elections. And we can have a qualitatively equal Parlament and Govern like the annuled by the judges.

What is at stake is the break of one of the Europe’s oldest nations. That arose and is kept when his social territorial components verify and accept the bet of jointly living all, to overcome the weaknesses and limitations of their isolated territories. Spanish nation of which the Catalans form a part from his beginning and establishment. And the secessionists do not offer the Catalan people for this break, a clear and favorable offer of rights, freedoms and progress for him. A prooof of the small bourgeois adventurerism of the separatist views and theses is the withdrawal of his exclusive ideas of the practical totality of the institutions and European nations.

The secessionist controls handle the demagogic arguments, the half truths and the slanted historical interpretations as no one else, to attract and keep his potential electorate. Because, the truth is relative and is one more way for them, in altars of their “so called freedom” of the Catalan people. And they feed his separatist zeals with many-colored hatreds towards the Nation where the Hispanic peoples became great. It is the paradoxical and insane rancor, on the other hand very recurrent, against that one that has helped you very much and with which you have shared your life.

His political argument is based on the exploitation of the human passions, which are insatiable, by epistemologic definition. The greed of having more than the other, without considering the benefits intercommunication in the modern democratic societies. The egoism of the abandon of the national solidarity, without admitting that in all the nations are zones more backward and depressed that others. The lie of the manipulation and distortion of the lived common history; as instrument of justification of his imperious and solvent actions. The envy, as expression of the own mental lacks; represented and satisfied at the moment, in the Utopian independent Catalan nation, full of advantages and blessed by the goddess Fortune. Spilling to Catalonia her inexhaustible horn of pleasure, money and personal and social kindness. The conceit of the separatist controls, which satisfies when they think about the admiration that they assume are waking up in the others.

The social virtues, taught and learned largely by the observed and received example, are the only and real brakes against the temptations that arise from the loose passions in the soul of the men.