The Islamic State has the strategic advantage of his territorial unity, which allows him to support the fights following his interior communication lines. His enemies are dispersed by his borders and operate in multitude of combats sectors or strips. This advantage can be used to fix and keep his enemies, dispersed and operationally unconnected for the different countries and zones. This way, IS preventing them any concentration to attack him.

So, in his Mosul’s operational center, with approximately 2 million habitants, the major city under his power, and the third of Iraq, he keeps the Erbil’s peshmergas fixed, the capital of the Iraqi autonomous Khurdistan. These are not capable of throwing an individual offensive, to go snatching cities and zones from the ISIL and are kept at the defensive. They are Sunnis Kurds, that do not want to coordinate with the army of Iraq and the sectarian Shiites militias. 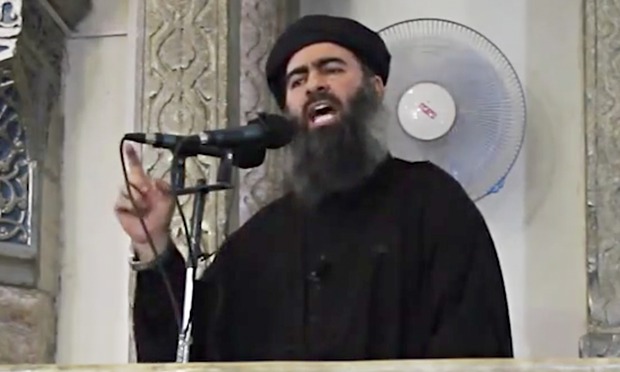 In Anbar, the ISIL occupied al-Ramadi, its capital, where the Iraqi army went out, here also, at the disbandment, in an unforeseen and accelerated retrograde march. Los iraquíes culparon de sus desventuras operativas a una gran tormenta de arena, que facilitó la “marcha al combate” de los muyahidines del DAESH. And he threatens the western flank of Baghdad, which says to be training and concentrating forces to recover her, departing from the new base in Taqaddum, at 25 km from al-Ramadi, where are a reinforce of 450 new American soldiers of the four stars American general James Terry. Which acts as a bolt, a ground perpendicular obstruction, against the projection of the ISIL over Baghdad.

The first great zone includes all the south of the Caliphate, from Aleppo’s south-east up to al-Ramadi, following the course of the high Euphrates. In her, the ISIL is spreading and being consolidated, occupying Palmyra city, finishing the expelling of the National Syrian Army from Dar-ez-Zour’s province (his last troops in her are surrounded at the west of the capital) and the Iraqi soldiers and the Shiites militias from Anbar’s province. At the west of Palmyra are Tiyas and the military airports of the Shayrat, occupied by the NSA, which are vulnerable targets for the ISIL, capable of attacking them from two marching directions. With it, a western defensive flank, directed to Damascus, might be established.

In the north of Iraq, the ISIL keeps his positions in Nínive’s province and part of Saladin’s province, so being consolidated also in the high Tigris.

In Syria, at Aleppo’s north and north-east, along around 400 Kms. of the border with Turkey, up to Hasaka’s frontier province, the ISIL keeps a strategic base, using small offensives and tactical retreats, in a zone of great operational instability. Trying to debilitate the Front al-Nusrah (near the frontier Azaz), the Syrian peshmergas (in Kobani) and other opponents groups and to keep open the narrow frontier sectors, Ras al-Ayn, between others, where he realizes his exchanges of crude oil and derivatives, seized goods, armaments and new supporters. Also he wants to stop the offensive of the opposition in Aleppo, since the ISIL does not have now free means to exploit any destabilization in Aleppo, that would be produced this way. But in Hasaka he wants to be consolidated, to increase his geographical continuity, to protect his frontier passages with Iraq and Turkey, here is Tel Abyad, and to increase his strategic rear, reinforcing this way the Palmyra’s projection over Damascus.

AN EXECUTION IN PALMIRA.

Turkey, which wants to keep in his south border a difficult military politic balance of power, suspects so much of the (Syrian) Kurds of the YPG and of the ISIL, both approaching in force to his territory. And Erdogan is considering to establish a safety zone of 10 Km. in depth in Syrian territory from the common border, occupying her with around 12 thousand Turkish soldiers. From her, the Turks might also partially control other more 25 or 30 Km. in depth, using his heavy artillery. It is a thorny and controversial topic, of international indefinite transcendence, so the command of the Turkish AA.FF. has asked Erdogan for a formal wrote order, that the President still has not granted.

The air bombardments of the Coalition of the 60 nations, assigned to the Operation «Inherent Resolve», erode and cause casualties to the Islamic State during almost one year. But they do not stop his military principal operations of fixation of his enemies and of increasing the territory of the Islamic State. At less that the western countries, including the USA, the NATO and the European Union, in any degree and practical necessary national combination, are ready and resolve to put on the Syrian and/or Iraqi territories a “sufficient investment of their own soldiers”, in the form of combined ground forces, distributed in the combinations adapted for the tasks that they will assume, the ISIL will not be beaten by his enemies of these Arabic infected countries. And it seems that the ISIL will possible be indefinitely defend from his frontier enemies. In the air raids in Syria take part Arabia, the USA, Bahrain, Canada, the Arab United Emirates and Jordan. In Iraq, asking for the authorities permission attack Australia, Belgium, Denmark, the USA and Great Britain.

The Geographical Scene of the Islamic State (ISIL).

This organization acts in a diffuse, not occupied, but controlled strip, of 300 thousand Km2., that spreads over Iraq and Syria, from Baghdad up to Aleppo and the mountains of the center west of Syria. The width changes along the route. The pillaged territory begins in Faluya, at 60 km to the west of Baghdad, and includes the nearby cities of Habbaniya and al-Ramadi and and Anbar’s extensive and desert province. And, following the Euphrates towards the northwest, it reaches the riverside cities of Haditha and Âna, before penetrating in Syria by Abu Kemal, leaving behind Níniveh and part of Saladin provinces. In the middle of the south and eastern desert of Syria, only relieved by the river, is Dayr al-Zawr. And continuing by the river, we come first to Raqqa, close to the river mouth of the river Belikh in the Euphrates. And then to the artificial lake al-Assad in the great meander of the Euphrates, to continue up to Aleppo and the Kurdish mountains of the center west, in the border with Turkey. Up to 10 million persons might be controlled by the ISIL in this territory. 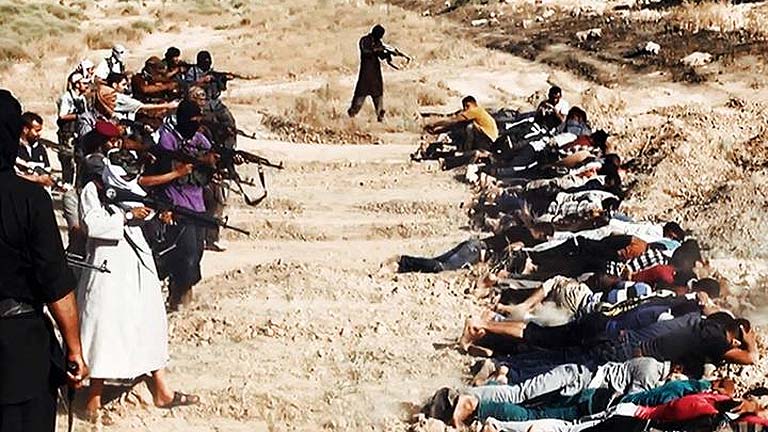 EXECUTIONS OF ENEMIES OF THE DAESH

It is not easy to move by these lands, which are infertile, beyond the irrigations of the Euphrates and of the artificial lake of al-Assad, without leaving a «tactical fingerprint» of the march. The lands of this great strip lack concealments and natural covers, in the shape of forests, extensive bushes and mountains. This does that the most frequent refuges and stays for the yihadists groups are the villages and populations along his backbone: the Euphrates, his aluentes, as the Jaipur in Hanaka’s province, and his banks. For his defense and more lasting cover they have to disperse by them, forming one or several «muyahidins squads» of not more than 40 men each one.

In any case, the fight in the occupied territories by the Islamic State is an urban fight. It is not an area for a movements warfare. It was so in June, 2014, when the Islamic State spread out, uncontrollably and overwhelming, by the north and north-east of Iraq. And the 30 thousand Iraqi soldiers of the Niniveh and Saladin provinces, went out, afflicted and in stampede, towards Baghdad. Looking for protection and refuge between the walls of the gigantic city and his al-Sadr shii neighborhood, at the east of the Tigris (known as al-Sadr city). And it before the simple «march to the combat» of several hundreds muyahidins. Mounted in Toyotas pick-ups, half “roof opened”, without any armoured and armed with light cannons and heavy machine guns. Certainly, who does facilitate the always present Toyota vehicles to the muyahidines? Some neoconverted concessionaire to al-Bagdadi?

THEY LOVE TOYOTAS, WHOSE PAY IT?

The operational strategy of the irregular bands of the Islamic State centres on never let been got in combat by the Armies or other great forces in «lost in advance» combats. His technics and tactics are the constant and far-sighted mobility; the dispersion and the infiltration in the urban fight, going forward in a flexible and wearing out defense, with space cession; the small, dispersed and more or less simultaneous or sequential actions in an area; the flight by covered bounds; the fight with limited goals and in profitable temporaral conditions; the systematic giving up of positions, forcing the enemy to redeploy and to be prepared every time. They can win to the ISIL the necessary time to survive.

In the temporaral occupations of great populations, they extend his defensive positions beyond what it is necessary in the conventional defense. Covering this way a major surface. His «delaying points» are diffuse, secret and imperceptible to the strangers. It is necessary to enter the houses to detect perforated walls and to find alleys under a furniture or a carpet. The destruction that generates the vague heavy fire, reinforces his combat positions, surrounding them with debris that divide and impede the accesses of the enemy. Except when they are reached by one direct impact. The “resistance nests” have more importance in this fighting form. Because the occupation of the defense zone is more tenuous, they cannot strengthen too much the positions, the sights are more short and there exist numerous approximation routes. They depend on the delaying points, to which they return if they are invaded or destroyed. Numerous “alternative positions” exist. This “resistance structure” allows to deceive the enemy, who attacks and burst, on the forward limit of the defense position: about his real extension, the limits of the sectors that form her and the interest of the rebel commands in the defense of the zone; and manages to disperse the heavy fire of the attacker.